It really takes a while before I could update what has happened at our centre. Much excitement was going on during the last quarter of the year 2011. It was not easy to write and update our blogs while focusing in organizing and teaching programs and classes. I will try my best to do so.

Our 5 to 8 year-olds completed their Kindermusik Young Child semester 2 last December. It had been a great semester as children started to play melodies on their glockenspiels. Some of them told me that they even tried it on their piano, which made them excited. I could see the children were enjoying their fruit of labour – having to learn all the theories and took some time to build up their musical foundation in Semester 1. They are now more confident to play on melodic barred instrument and also with the strong foundation in music, they seem to be able to make music everywhere they go! They could pick up a spoon and a water bottle, and start playing steady beat by scraping the edges of the bottle, while another child hitting the back of two metal spoons and they formed a little ensemble in an impromptu manner. I am very touched when I see how music has become part of the children’s souls.

In Semester 2, we also worked a lot more on ensemble. Children were handed various percussion and barred instruments of different timbres, and they played music with Ostinato – short repeated rhythmic patterns. Parents also had a chance to experience ensemble playing, and I would say these parents really have a talent for music despite many of them do not have musical background!


Children receiving their certifiates. Look how happy they are! 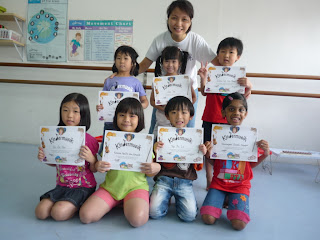 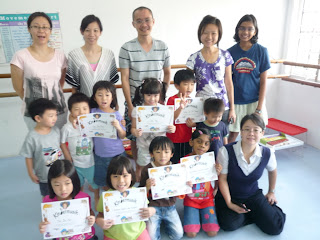 It has been such a great experience and we had a party at the end of the last class. Children also received a certificate for their great commitment and effort to complete the 1st year course.

I was looking forward to more composing of short melodies with the notes that they have learned so far. But children were less adventurous in this and I shall encourage them to do so in Semester 3. I am looking forward to start Semester 3 with the children. They will be advanced to another level of musical theory learning and also learn how to play a very unique folk string instrument which we seldom see in Malaysia – the two-string dulcimer.
Posted by the little clovers at 6:26 PM No comments:

the little clovers
We provide Montessori, Kindermusik, Ballet, Fun Dance, Math and phonic courses in Johor Bahru for 0 to 8 years old. We have been licensed to teach all these programs since the year 2007. With vast experience in the Early Childhood Education, we provide parents with knowledge of educating their children at the same time teaching music and movement to babies, toddlers, pre-primary and lower primary children.