The Young Child in Kindermusik Sem 1

The 1st semester of the Kindermusik Young Child for the 5-8 year-olds ended last Saturday. The children were learning a lot of musical theories through focused listening, instrument play, moving with music pieces in the correct number of beats (Ta as crotchet, ti-ti as quavers, sh as rest). The children had fun working through the Kindermusik for Young Child curriculum -- using movement to work out the Ta and ti-ti, which they internalised the rhythmic patterns and helped them greatly in their instrument play later. These many lessons of musical theories in motion have pounded their foundation in developing their musicianship.

Children working with the rhythmic patterns, they had fun!

Use Music to Paint Pictures

They also learn that music is just like colours, and music can be composed and played to depict a scene in the mind. They listened to the various classical music pieces that paint the pictures. For example, in 2 lessons which we worked on the music of birds, they were introduced to the sound of birds and the word Aviary. They and their moms & dads were first introduced the music Carnival of Animals - The Aviary, which the flute in the ensemble played an important part to depict the birds.

I like one episode when the children brought instruments that they made using different things that they could find in their houses, they were so creative! Kareen made a cymbal using a stainless steel lid of a pot, the mallet was a stainless steel chopsticks. Jia Le & Uma made shakers using beverage bottles. There were many more creative ideas that they had brought!

When I narrated the story of the "Weather" (Sunny day followed by a rain and thunderstorm, and it was sunny again), Jane played the Korean bell that was attached to a basket brought by Kareena to depict the first pinch of Sunlight. Then Uma & JiaLe started playing their shakers to resemble the rain, and Kareena, Zhi Hui & Zhi Jean played the "cymbal" and drums to "create" the thunderstorm. I recorded this and played for their mom & dads, they were so impressed!

Learned about the Great Composer, Mozart.
The children learned about Mozart and his life briefly. Then, they were played his Minuet, and Parents and children had to learn how to dance to it.

The children also learned about how music can tell stories which came in the form of Opera. They were told the story of Mozart's infamous "Magic Flute", and we used the puppets to work out the story in class. Cool!

Finally on the Glockenspiel!
After getting all familiar with Ta, Ti-Ti, Rest and the C note, and instilling some musical "sense" in the children, they are now learning the Musical Staff (the 5 lines) and the C' note, which is to be on the 3rd space.

Auntie Chazyee worked with the children on the gigantic musical staff, it was a lot of physical movement so to help them understand the abstract concept of the "lines & spaces".

After all the theories, it was real time to learn to play the Glockenspiel. The children learned how to hold the mallets in correct positions before hitting their first notes on the Glockenspiel.

Finally, they played the C notes on their Glockenspiel with the song "Train is a-comin". It was only the beginning of their glockenspiel playing and they were already looking forward to more!

The A note was introduced in the following week, and the children also played it and the C note in the song "Doorbell is ringing". It was very nice to hear a uniform sound from all the glockenspiels, this required a lot of concentration from the children. They were doing well!

We are going to work more on the glockenspiel and it is something which I am really looking forward to. I hope the children's glockenspiel skill will be developed in time for our Annual Parents' Morning on 15 Oct 2011!

Posted by the little clovers at 1:32 AM No comments:

Kindermusik for 0 to 18 month-olds 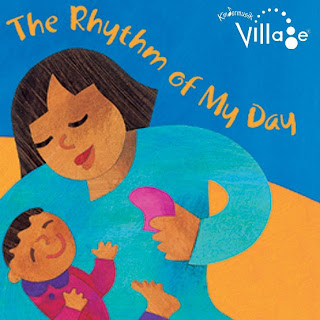 The Rhythm of My Day will help you bring more rhythm and routine to your baby's day, aswell as help evelop lasting learning skills. We'll show you how and tell you why music can help your little on soothe into the day's schedule and help build a strong body and mind network for learning.

*Due to delay of the Home Materials shipment, our class start date of this Semester is postponed to 19 Mar, 2011.* 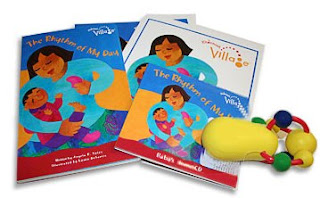 1. CD of beautifully arranged nursery rhyme and songs from class.
2. A rhyming picture board book -- The Rhythm of My Day
3. A set of Art Banners
4. An instrument for music-making at home.
Posted by the little clovers at 12:03 AM No comments:

the little clovers
We provide Montessori, Kindermusik, Ballet, Fun Dance, Math and phonic courses in Johor Bahru for 0 to 8 years old. We have been licensed to teach all these programs since the year 2007. With vast experience in the Early Childhood Education, we provide parents with knowledge of educating their children at the same time teaching music and movement to babies, toddlers, pre-primary and lower primary children.